Hello Mass NOW Family!
Mass NOW has been fighting for the ERA since our founding over 50 years ago. Today as the House votes on H.J. Res. 17 to remove the ratification deadline on the ERA, we stand proudly on the shoulders of generations of feminists before us in fighting for full constitutional equity.

Last week we celebrated International Women’s Day with the 22nd Annual Boston-Area International Women’s Day Brunch in the morning and Boston Got Next and SparkFM at night for a candidate’s forum featuring City Councilor’s Andrea Campbell and Michelle Wu. Please join us in sharing a huge thank you to Co Chairs Ellie Adair and Jill Ashton who brought together over 50 community partners for our largest IWD celebration to date! If you are interested in watching the presentation again you can access it here. Access Passcode: V#R&L@2Y

While we look forward to the ratification of the ERA we know that gender and race based violence will not magically disappear. On Tuesday, March 16th eight Asian women were murdered in a mass shooting hate crime in Atlanta by a white supremacist. We at Mass NOW mourn their lives and extend our deepest sympathies to their families and loved ones. As an organization that continues to acknowledge our history of whiteness, we call for an end to this terror and stand in solidarity and support of our AAPI community. Join NOW members from around the country TONIGHT at 6PM ET for the Break the Cycle: A Conversation About the Rise of Anti-APIA Racial Violence.

As we continue to celebrate Women’s History Month we look forward to building intentional community at our events, holding space for our members to grieve, and pursue actions to hold our institutions accountable for centuries of gender and race based violence. We will continue to dig deeper to connect members with opportunities to pursue intersectional feminist justice.

Take Action to End Period Poverty
Over 160 people have contacted their legislators to ask them to champion the I AM bill and end period poverty in Massachusetts and over 50 legislators have cosponsored HD651/SD.748! The Co Sponsoring deadline has been moved to the hearing date so make sure you add your voice and contact your State Representative & Senator to ask them the co sponsor and champion the I AM bill! Join us at our upcoming MME Coalition meeting this Friday, March 19th at 12PM on Zoom to learn how you can take action in the menstrual equity movement!

Do you know who’s running?

For 40 years, the Mass NOW PAC has endorse feminist candidates and work to get them elected, statewide. This year the Mass NOW PAC will be endorsing in critical municipal elections across the Commonwealth.

Join our PAC meeting Thursday March 18th from 6:30-8:30 PM to learn about feminists running for office in your community! 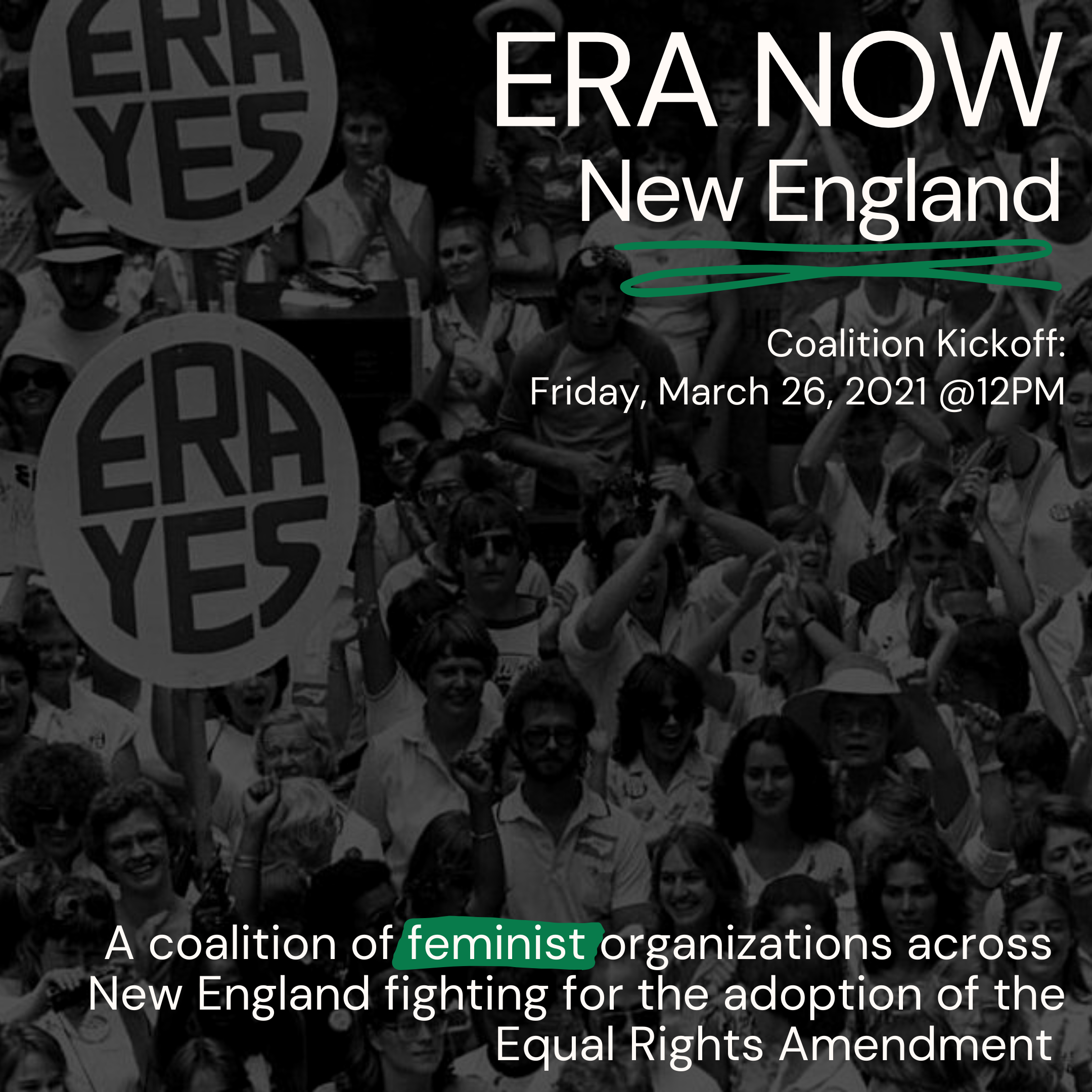 We are excited to share with you a new initiative we are collaborating on with NOW leaders and activists from around the region. ERA NOW New England is a coalition of feminist individuals and organizations from Connecticut, Maine, Massachusetts, New Hampshire, Rhode Island and Vermont fighting for the adoption of the Equal Rights Amendment to the United States Constitution.

RSVP for our Coalition Kick Off March 26th at 12PM to hear from Kamala Lopez – filmmaker, actress, writer, director, political activist and creator of the award-winning documentary Equal Means Equal, and learn what you can do to finally make the Equal Rights Amendment part of the United States Constitution. 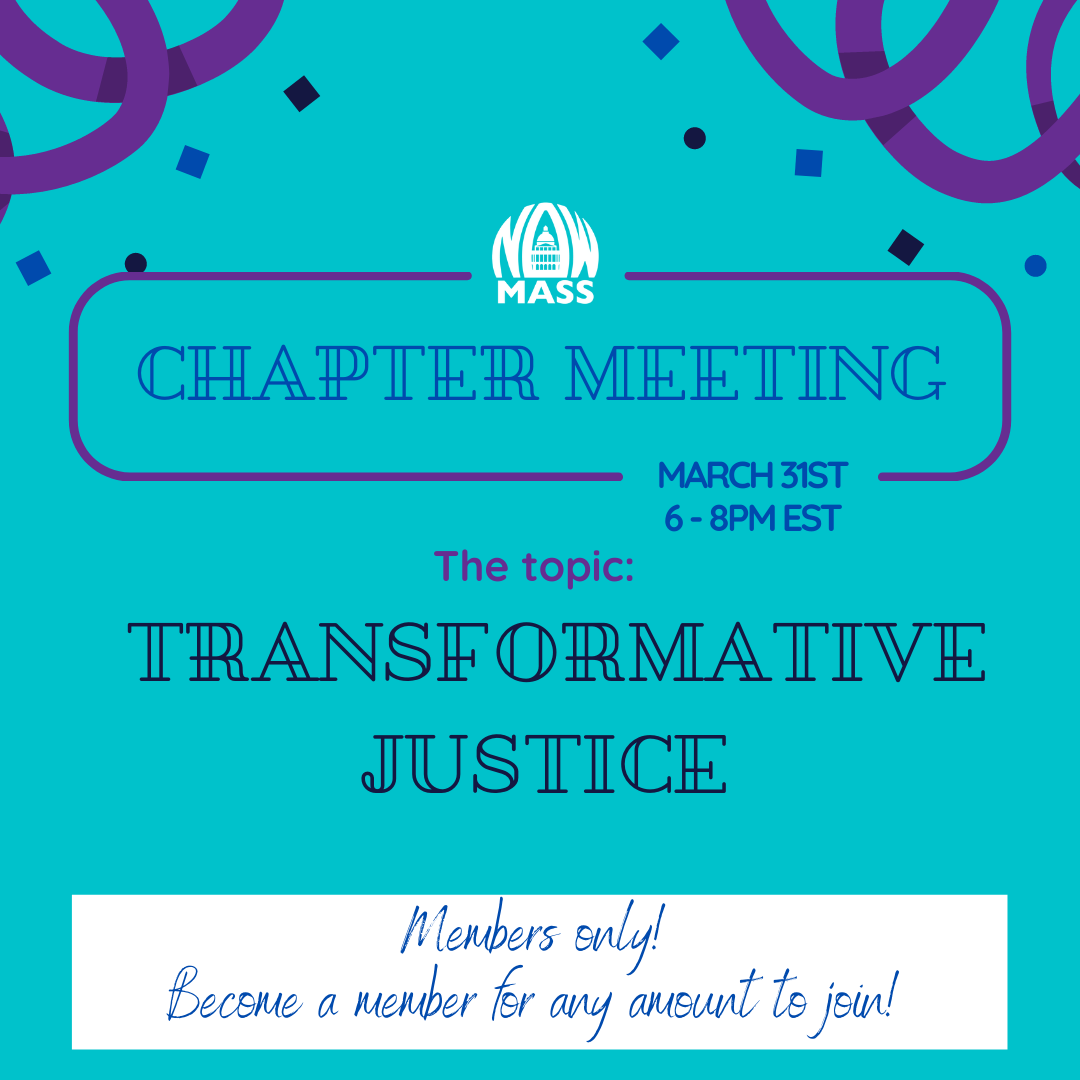 Register now for our upcoming Chapter Meeting to meet feminists from around the state, hear updates on our legislative agenda and participate in a consciousness raising around transformative justice and abolition!

Mass NOW advocates for a number of criminal justice reform bills, but we know reform is not enough. Join this consciousness raising to learn about abolition & transformative justice from some of our favorite feminist thought leaders.

Check out some of our readings ahead of time on the event page here.