Dear Mass NOW Community,
I hope this finds you all well on the other side of a historic Boston Mayoral Primary election! For the first time in over 90 years, the next Mayor of Massachusetts largest city will not be a man, or white. There is still a long way to go to fully realize our feminist democracy, but we are grateful for this historic movement towards this goal.

While states like Texas and Mississippi are passing the most violent anti-choice legislation our country has ever seen, we know we cannot give up any ground and are working steadfast to fight for our feminist agenda here in Massachusetts. Please join us in donating to abortion providers in Texas and at an upcoming event this Fall.

It is with deep appreciation that I share that Bria is transitioning out of her role as Mass NOW Co Director and has moved back home to work for the City of Temple, Texas. Please join me in thanking Bria for her commitment and passion for Mass NOW, and feel free to reach out to her at Bria@massnow.org. Even though Bria will be transitioning out of the role of Co Director, she’ll be rooting for Mass NOW from Texas and is looking forward to seeing everyone at the 11th Annual Feminist Affair on Oct 14th!

Get your early bird tickets to the 11th Annual Feminist Affair by September 30th! Join our vibrant feminist community virtually to celebrate our successes over the last two years and honor a group of dynamic change makers in Massachusetts and beyond. Given that we were unable to hold this annual event last year, we are excited to be awarding two Feminist in Action Awardees this year! Bria Gadsen, Founder of Love Your Menses and Chastity Bowick, Executive Director of the Transgender Emergency Fund.

Last Tuesday, Sept 14th, the Joint Committee on Election Laws heard S.475/H.769: An Act Supporting Parents Running for Public Office. This bill would allow campaign funds to be used for childcare. As of 2020, 51% of Massachusetts residents were female, though the current Massachusetts legislature was only 31% female. At least 13 other states are already allowed to use campaign funds to pay for childcare needs. Email testimony to Colleen.Bellotti@mahouse.gov and Michaela.Gaziano@masenate.gov.

That same Tuesday, the Joint Committee on State Administration and Regulatory Oversight heard S.2016 An Act Requiring Menstrual Products in all State Buildings. Submit written testimony to Jordan Latham at jordan.latham@mahouse.gov and Mary Wasylyk at mary.wasylyk@masenate.gov.

An Act to Ensure Gender Parity and Racial and Ethnic Diversity on Public Boards and Commissions (H. 3157/S. 2077) would promote diversity in leadership and governance that broadly reflects the demographics of our Commonwealth. Submit written testimony to either jordan.latham@mahouse.gov and mary.wasylyk@masenate.gov.

Write Senate Ways & Means to encourage them to strengthen the jail-based voting language before it goes to the floor. Any pressure will help ensure they don’t further water down or remove existing jail-based voting provisions.

Back to School Rally to End Period Poverty 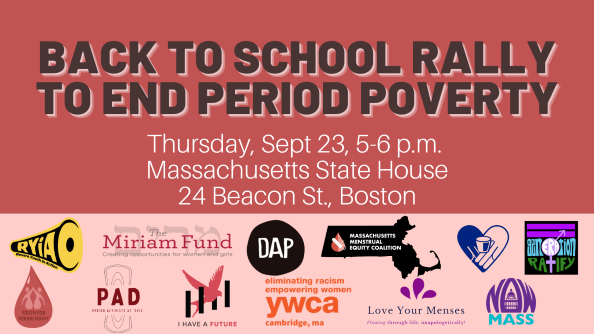 Happy Back to School season! We’re looking forward to seeing as many of you as can make it at our Back to School Rally to End Period Poverty on Thursday, Sept 23rd 5-6PM at the MA Statehouse or online!

Check out organizers Hannah Schwichtenberg and Abra Hwang’s OpEd in Commonwealth Magazine promoting the rally and the I AM bill!

Mass NOW is seeking a Social Media, Fundraising and Legislative Intern for the Fall semester, starting Oct 4, 2021 through Dec 31, 2021. Applications will be considered on a rolling basis.

These positions are 5 hours a week and offer $15 an hour in compensation, along with mentorship from our majority BIPOC/LGBTQ leadership board. Learn more about the responsibilities for each position on our website.

Get your early bird tickets by September 30th!